After planting, your grapevine still needs regular attention and care. Here you can find details about watering, trellising, and soil care. Young vines need to show vigorous growth in order to be trained further. The process that takes place during the first year is considered complete if a strong main stem showing obvious and vigorous grown; otherwise, they have to grow on for another year. What follows after the 1st year depends on the form of training you have chosen. 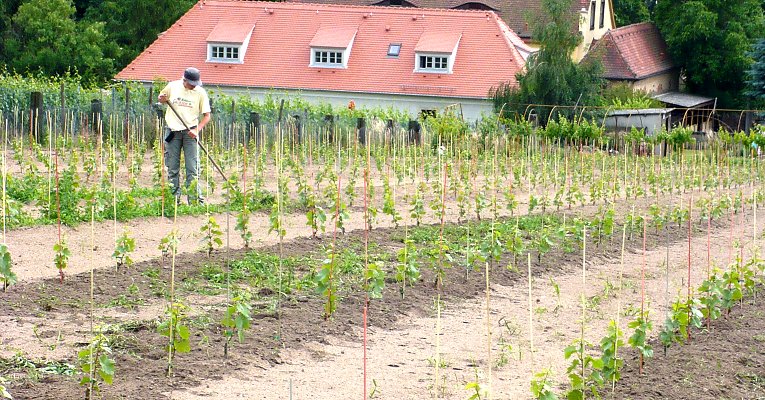 Young grapevines in the first year

During the first year, the vine has to develop one strong, long, and well lignified shoot; this will become the future trunk (image 01). This shoot emerges directly from the grafting point ('bud union'- thicker part) or just above. Any other shoots should be removed. If you have planted a potted plant that already has a woody stem with several buds or green shoots above the grafting point, then the lowest shoot should be used, the other buds removed, and the trunk shortened.

The small main shoot is then tied onto the stake, e.g. with rubber cord/band. Occasionally it will already produce a grape cluster, which is best removed. Axillary shoots which grow occasionally from the (leaf) axil remain on the plant. Do not touch the shoots in the first year (young shoots that collect sap and are situated above the older leaves). Breaking off such shoots directly at the axil on the green main shoot can damage the important bud developing there, or it may cause premature bud burst ~ "bud break" ~ premature sprouting (Image 02).

It is beneficial to cover the planting area with a layer of 5-8 cm of grass clippings, leaf litter, or straw, and to regularly renew that layer to prevent the soil from drying out and to control weeds competing for nutrients. During the first year at least, do not attempt to grow any groundcovers such as grass or flowers around the vine.

In the vineyard, the vines can survive purely on rainwater after planting. Vintners (winemakers) say that the vines must "go hungry." This stimulates the roots to grow deep into the earth (up to 30 meters!) in search of water. This is beneficial for aroma development, but not for fruit size. That is why table grapes are treated differently; that is, they are watered more. In the first year, it's enough to water every 2 - 3 weeks, a bit more often during dry times. Special attention must be given to vines which grow under eaves (or similar) and receive hardly any rain.

Grapevines growing in normal garden soils (i.e. humus-sandy to loam) should not be fertilised again after planting. Otherwise the vines grow too vigorously, which tends to make them more susceptible to fungal diseases.

As it matures, the shoot should turn a golden-brown, brown-red, or grey-brown colour (depending on the variety). This lignification process, starting at the base of the stem, becomes visible by late summer. Eventually, the shoot should be at least pencil-thick and 2 - 4 metres long (Image 03). If the desired shape does not require a long main trunk, the shoot can be trimmed back to about 1.5 m already at the end of August, to promote lignification and the maturation of the lower buds (summer pruning - Image 04). If the vines are meant to go high, summer pruning can be omitted.

In summer, the main shoot grows about 2 - 3 cm per day, resulting in a curved and slightly limp looking shoot tip (Image 05). This indicates that the vine is healthy and its growth vigorous. However, if the tip of the shoot looks somewhat compressed and has hardly unfurled (Image 06), the vine is stagnating. This requires action. Is the soil sufficiently moist? Does the plant receive enough light and heat? Are there other plants in the vicinity such that the vine suffers from root competition? The latter is usually the main issue. In this case, the other plants must either be removed or the vine transplanted.

It is not worth it to train a plant with a weak main shoot. If, despite optimal conditions, the plant has grown only a short shoot which isn't at least as thick as a pencil by autumn, then the vine should be cut back to 2 buds (Image 07). The vine then has to repeat the first year again in order to develop a vigorous main stem.