In this section you will find all the information you need to plant your grapevine, so that your vine can start the first year of growth under the best conditions. You can find potted vines from spring to late autumn at many nurseries, while bare-root plants are available from vine nurseries (or FassadenGrün!) in spring. A grapevine cultivated from suitable stock should produce a full yield after 4 years. *Refer to the sequence of images. 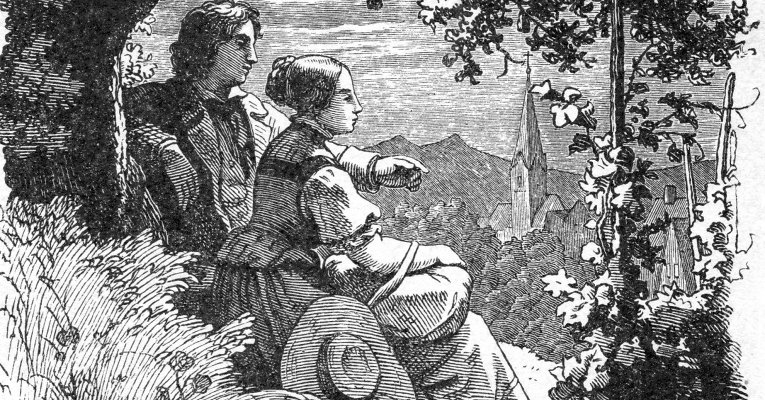 Propagation of a grapevine from cuttings is relatively easy; is is usually sufficient to plant the cuttings (woody stems) directly into the soil. But such ungrafted cuttings are forbidden in wine-growing areas because phylloera, a grapevine disease, can spread easily. The solution to this is grafting. That is, cuttings of the desired grape variety are joined with cuttings of a robust wild grapevine ("rootstock") until both grow together. For amateur table-grape growing and enthusiasts alike, the especially vigorous '5 BB' is often used to guarantee fast initial growth. But with grape varieties like "Muskat bleu," which are themselves vigorous growers, this combination can lead to stunted growith in the fertile home garden, and the vines can then hardly be tamed by pruning. FassadenGrün therefore pays attention to the right combination of vine variety and rootstock.

After being grafted, the plant cuttings go to the nursery and live their 'year 0' in a kind of pre-school. They are planted outside so they can develop sufficient roots. The grafted 'scion' grows to about 2 metres. In autumn, the plants are cut back above the grafting point and dug up with their roots, dipped in paraffin (to protect them against drying out), tied in bundles, and stored in cold storage. In spring we are ready to sell them as bare-root vines.

FassadenGrün offers bare-root grapevines from March to April (May). The paraffin wax wrapping the roots protects the plant from drying out and should be removed before planting. If it is not possible to plant immediately upon receipt, store it in in a cool, dark place (regrigerated if possible). Exposure to sunlight on the paraffin can lead to a greenhouse effect, causing the plant to bud prematurely.

Before planting, the vine roots must be submerged in water for at least a day. Traditionally, the roots were trimmed, but according to more recent findings, the roots contain vital substances for the plant, so root pruning is discouraged. Plant the grapevine such that that the paraffined head protrudes approx. 10 cm from the soil. Sprouting can then take approx. 1 - 4 weeks, depending on the stage of the vine and the weather conditions. The strongest shoot is carefully tied to the stick when it reaches 15 - 20 cm in length; all other shoots are broken off. Because they were pre-cultivated, the plants will be strong enough to go right into their 1st 'training' year.

From May onwards, FassadenGrün also has container grapevines available. For this purpose, bare-root vines are potted and cultivated with one shoot. They have already been cultivated outdoors in the nursery (pre-school: 0 year). Watering and pruning are not necessary here.

Any grapevine will be most pleased in a planting area / flowerbed of about 0.5 to 1 m². If this is not possible, e.g. on the footpath in front of a house wall or where space is limited, then a recess/area the size of a large plate will work, as long as the surrounding pavement is reasonably permeable to water.

*Note: do not plant vines in the vicinity of trees, shrubs, conifers, or other old vines in your garden, because the root competition will prevent them from developing. However, it is possible to plant several varieties of grapevines in the same planting area and even in the same pit ("quiver" style arrangement) to extend the harvest period.

Planting usually takes place in spring, but potted vines can be planted any time of year, as long as the ground is frost-free. The planting hole must be much larger than the root system, and quite deep (dig at least two spades wide and deep), and the subsoil needs to be aerated, i.e., loosened to allow the roots to develop.

If necessary, incorporate some drainage, as grapevines do not tolerate waterlogging! After the planting stake is rammed in, backfill with a layer of (sieved) fine soil, place the vine in the hole, backfill with topsoil and carefully tamp the soil around the vine... establish a watering ring (a slightly mounded earth ring around the plant to hold the water) and water the plant in with 5-10 litres of water. The spherical bud union (grafting point) should be approximately 8-12 cm above the ground. A paraffin layer protecting the vine from drying out may still be present, but will degrade naturally. The stem is then tied to the stake below the the grafting head. The strong main shoot is also tied to the stake, and any further shoots are cut and removed. Mulch the planting area. In an open field situation (e.g. vineyard), it may be necessary to protect the vines against foraging deer, rabbits etc..

In an exposed field, protect the grapevine from rodents and other herbivores, i.e. with an enclosure of plastic or wire mesh. In the garden, young shoots are particularly attractive to slugs. Check daily. Young plants can repair themselves with their 'dormant eyes'-- in such a case, protect the vine and wait another two weeks, as the vines manage to sprout 1 - 2 more times after an unwanted breaking off or eating away of the fragile shoots.

Protected grape varieities are not allowed to be propogated via cuttings! Irrespective of this, the propogation of cuttings is also forbidden in many wine-growing areas (at least in Germany) because of the danger of phylloxera, a grapevine disease. Outside the wine-growing areas, there is no prohibition, but grafted vines should also be planted there, because thanks to the "rootstock" they are more vigorous and can cope better with the soil. Despite these disadvantages, the propagation of cuttings can be intreseting for historic vines and is therefore briefly described here.

The cuttings (which should have about 3 -5 eyes) are cut in late winter, wrapped in paraffin film, and stored in a refrigerated container. After the roots are submerged in water a few hours, they are placed in the planting pit together with the planting stake. The soil shoudl be a mixture of garden soil and sand. The cutting is placed in the ground with the eyes pointing upwards, slightly bent to respect the growth direction of the future shoots. Plant it deep enough so that the top bud peeks out above ground level. Then water thoroughly and cover with a heap of sand. The plant should be kept moist for the next few weeks. All this can also take place in a plant container in a protected place and then be planted out later.

Have you had poor experiences with purchasing potted grapevines in the past? It is most likely due to the way the vines were grown, as many providers take the cheaper route of planting the just-grafted vines immediately in containers and putting them on the sales' shelf. This saves a year. The plants may have been put in a greenhouse in winter, in which case they are less resistant to late frosts in May and often won't make it. Another common problem is when potted vines already have one or more woody stems above the grafting point; these are plants from the previous year that have been put back on the shelf. Cutting just above the grafting point and then forming new shoots will save the plant. Old, gnarled vines in very large containers are vines that have been removed from vineyards in the course of regular grubbing-up. They are-- like almost all vineyard varieties -- typically very susceptible to mold.