The horizontal cordon used to be very common for wall and house vines. The leaves and fruit grow from one or two horizontal, strictly trained arms. One-sided angles and T-shapes are possible. The vertical main trunk usually remains foliage-free. 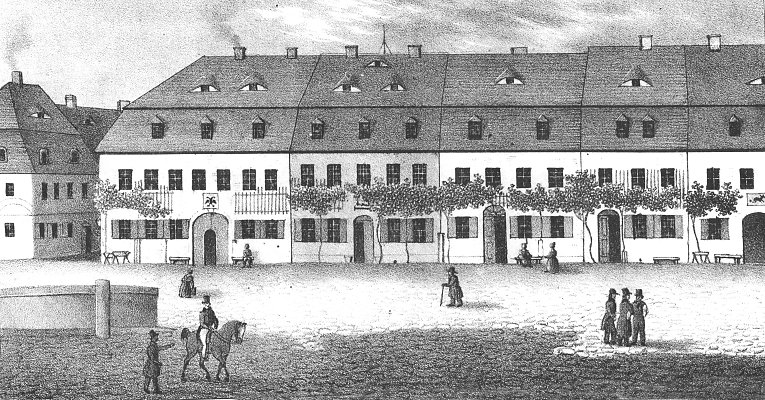 This cordon method was passed down as "Thomery-Cordon" from its French village namesake near Fontainebleau / Paris. Exceptional table grapes were grown in this way from quality (Gutedel/Chasselas) grapevines. The photos shown here were taken mostly in the east German region of Saale-Unstrut.

For a Thomery cordon, you will need a horizontal strip 70 to 120 cm high. For thinner, higher bands of greenery, refer to our section on garlands. The optimal length for a cordon arm is 1.2 m, or 2.4 m for a bilateral cordon (T-shape), perhaps longer with today's vigorous grapevine varieties. If the field to cover is very wide, you'll want to plant several vines. For good sap distribution in the T-shape, the two arms should be of equal length. The trellis should be at least 0.5 metres from the ground, but heights of 5-6 m are also possible.

Wire rope systems and wooden espaliers are both fitting here. As a rule, a single vertical wire rope to guide the vine upwards with 2 - 4 horizontal wire ropes (spaced 25 - 35 cm apart) is sufficient. The arms are tied to the lowest wire rope, from where the shoots then grow each year into several new tiers, one above the other, and interlock with their tendrils. If not all the shoots hook on themselves, they can be tucked behind the wires or tied.

For the training procedure, refer to the illustrations below. On the horizontal arms (cordons), branches are developed at intervals of 15-20 cm. If these branches are developed *only* on the upper part of a single side (via buds every 2 to 4 eyes - 'cordon cut'), the whole arm will be more productive, robust, and longer-living, since the flow of sap will only be slowed down in the upper half of the arm. The canes later undergo pruning, usually spur pruning or, if some fail, rod pruning; for some special varieties and for very high yields- also cane pruning. If necessary, additional summer pruning.