While they thrive better when planted in the earth, grapevines can also be grown in pots. Here are three possibile training techniques for container cultivation, depending on your purpose and container size. Please make use of the additional information provided under potted plants. 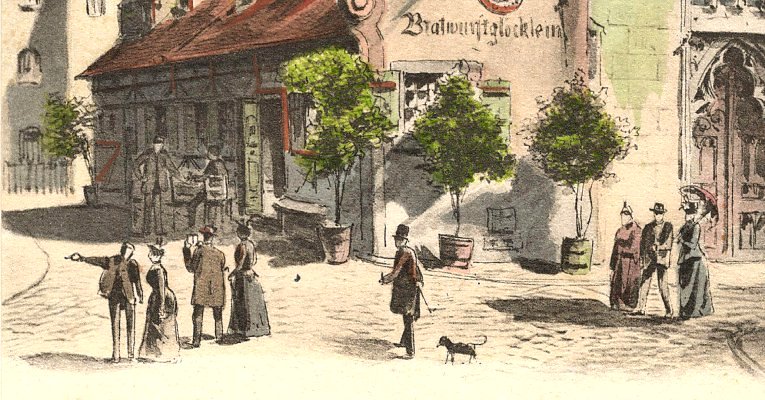 Potted plants at an outdoor seating area in Nuremberg / Bavaria, historical depiction, around 1840

A compact, small, perennial variety, which can be trained in various cordon systems; for pots holding 20 liters or more.

The empahsis here is on aesthetic. It brings lush grapes in the 2nd year, but will be much less productive in later years. Needs heavy ferlitilising after flowering. For containers > 10 litres. Usually only an annual.

Wintering your vine is possible in a cellar or similar storage room (or an unheated shed), as long as the pot is kept moist and the temperature remains well below the critical 12ºC limit. Otherwise, budburst will occur prematurely and the plant may die. In modern cellars, the temperature is usually not cool enough, unless the cellar is unheated and permanently ventilated.

If the vine is wintered in a greenhouse or similar, it should be moved outside around early (around the end of February); premature budding under glass and subsequent exposure to the elements should be avoided at all costs. Plants which have already budded should only be transferred outside in April/May to protect the fragile young shoots from frost.