This form is particularly suitable for narrow, vertical areas and/or for cultivating high quality table grapes. What may look rather rigid and somewhat unnatural at first glance, soon enough surpasses any "free" form espaliered vine: there is no tedious sorting of shoots, pruning becomes routine, and the trunk-stem structure remains very manageable. 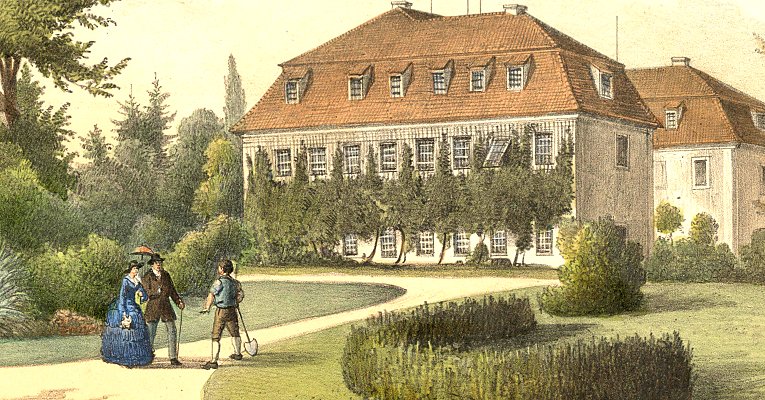 Vine espalier with vertical cordons near Rittergut Teichnitz / Saxony, around 1835

This training method most likely hails back to France, from where it then migrated to the rest of Europe. It was described in Germany by Hardy / Jäger in their work "Obstbaumschnitt" ("Fruit Tree Pruning") as "Herzstamm" ("Heart Stem") in Erfurt in 1855.

Not including the planting pit, each cordon needs a wall area of approx. 0.6 m x 1 m (max. 1.5 m x 2.5 m). For wider areas and the planting of several vines, space them about 1.5 m apart. To cover higher or larger surfaces, plant and train cordons at staggered heights (see diagrams below).

To support a vertical line of vines, install at least one wire rope; three would be ideal, spaced 30 to 40 cm apart, to allow young shoots to twine or be tied to wires on both sides. For very narrow areas, use 2 wire ropes and guide the shoots to one side only (see photo). Classic wooden trellises are also very suitable with this method.

The diagrams at the bottom of this page will assist you. The yearly vertical growth is about 50 to 80 cm; i.e, about 4 new branches. Once it has reached a certain maturity, there will be max. 8 - 12 branches or a max. distance of about 2 m between the lowest and highest canes; otherwise, the lower shoots will fail. The vertical cordon will end approximately 50 cm below the top of the trellis. After the framework has been formed, spur pruning (short pruning) follows, ideally with the green shoots tied to or tucked behind the single wire or two outer wires. The vigorous growth of the uppermost part of the vine requires rod pruning (medium pruning). At a later stage and over the course of 2 - 3 years, switch to cane pruning (long pruning) the several branches (see diagrams below), starting at the top of the cordon, moving to the lower ones, leaving only about 4 - 6 branches per cordon and increased distance between the individual tiers... to be followed by yearly summer pruning if needed.