The value of "Mitschurinski" lies in its extreme hardiness (frost resistance) in extremely cold climates. This variety tends to "trickle" (a viticulture term that refers to the loss of flower buds or early pea-sized fruit) and is somewhat susceptible to mildew on facades. An alternative could be "Regent."

Variety from the former Soviet Union; see below 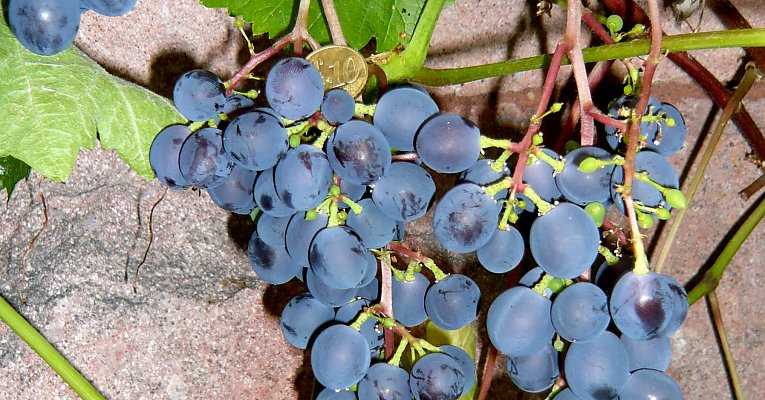 Grapevine "Mitschurinski" on a wall, Euro 10-cent coin for scale

"Mitschurinski" was bred in the former Soviet Union as a table grape for very cold regions, and is named after the famous Russian grapevine breeder Mitschurin. This variety was created by crossing pollens from mid-European varieties, including "Hamburg Muscat" ("Muskat Trollinger") with the highly frost-resistant Amur grape "Vitis amurensis." This variety is quite common in eastern Germany. This variety is only moderately resistant to fungus, and especialy if grown in or near dense vineyard areas, powdery mildew is a risk. Its value lies in its short growing time, the associated early maturation, and its very high frost hardiness (up to -35 degrees Celsius!), which makes it particularly suitable for otherwise unfavourable conditions and locations like mountainous areas. For the lowlands, other varieties described in this section are preferable. Can be grown in rows (as staked freestanding plant) at an altitude of 400 metres; up to 700 m high, it should only be trellised against sunny, sheltered walls. In enclosed valleys (cold air lakes), it is at risk of late frost; in wind-exposed positions, it is prone to "trickle" / have a poor fruit set. Foliage turns yellow in late summer. Average but consistent yield.

From the 2nd or 3rd year onward: 15 - 20 cm long clusters, with typically reddish pedicels, loosely arranged berries, not ideal for transport and storage. Some berries remain small and green due to trickling (poor fruit set). 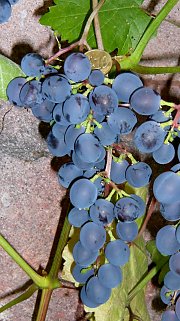