Care and Maintenance of Climbing Plants

It goes without saying that climbing plants require maintenance and trimming! First comes a development phase, and after the plant reaches the desired coverage area, regular maintenance will be required to sustain the plant and its appearance. The level of care and maintenance can vary significantly depending on the plant species. Here we'll show you how skillful plant selection and a clear delineation of the area to be greened will minimise the maintenance required. Photos of the climbing plants are also available here as posters (click on poster for enlarged view). 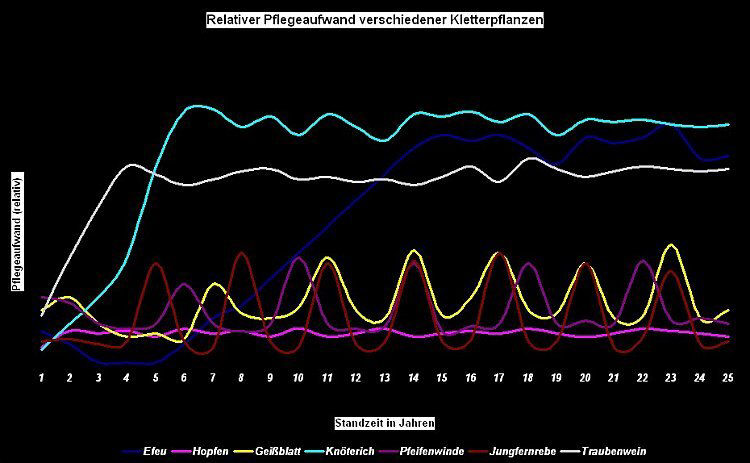 English ivy (Hedera) and other self-clinging climbers, such as Boston ivy (Parthenocissus tricuspidata) and Virginia creeper (P. quinquefolia): besides rarely requiring a climbing support, they are  fairly low maintenance, at least in the first years. Watering is also rarely required. After 5-10 years, it is time for the first trim. During the following years, once the entire greening area is covered (usually up to the eaves) considerable yearly pruning work is required in order to keep eaves and windows free... at least in theory. In actuality, this maintenance is often neglected and problems on the roof are overlooked, until the roofer discovers them...

Hops and annual tendril climbers: here, it is above all a question of working the soil (watering, fertilising) and on removing dry shoots in the fall. Overall though- low-maintenance, even after several years. They are similar to the clematis hybrids, which will last one season, die off, and be replaced the following year.

Honeysuckle and other twining plants, such as akebia or even the climbing hydrangea: often require a lot of initial care and be closely monitored early in their lives. Skimping on maintenance at this stage is not wise and the greening project will likely not survive the first development phase. The young shoots of well-rooted plants develop very quickly, which is perfect for forming the plant but which also makes for fairly constant maintenance, which can be tiresome. Yet without regular pruning, large amounts of dead shoots will result, which can accumulate into metre-thick mats of dead wood. Watering is often required, or at least helpful, and some heftier pruning is required every 3-5 years to allow more light into the plant and to generally rejuvenate it.

Silver Lace Vine (or Russian Vine, Polygonum aubertii): Initial maintenance is minimal to none, but as soon as the development phase is over, extensive pruning is in order to control the explosive growth of the plant. Watering is seldom necessary. Bittersweet behaves similarly, but will need more water.

Dutchman's pipe (Aristolochia macrophylla and A. tomentosa): These species require a lot of initial care in order to grow, but after that - apart from their relatively high water needs - they are almost maintenance-free, as they develop rather sparse shoot growth requiring little trimming. The biomass consists mostly of large leaves, which drop off in autumn.

The thicket creeper (or woodbine, Parthenocissus inserta) and e.g. Clematis montana are relatively easy to care for in all phases, usually need little water, and are therefore a favourite for greening projects. From time to time, some pruning and thinning is required to allow more light into the plant and for its rejuvenation.

Grapevine (Vitis vinifera), espaliered fruit trees, climbing roses (rosa), trumpet vines (campsis), and wisteria can usually only flourish against a façade when they are trained strictly into shape, this shape maintained through regular pruning. This high maintenance factor will remain throughout the lifespan of these plants. Except for the wisteria, their water needs are also rather high. With grapevines, roses, and espaliered trees: an additional and very important aspect of plant care is the plant protection (spraying and/or appropriate selection of mold-resistant varieties).

Size of Your Greening Area

Clearly, a larger greening area will also mean more work, e.g. more watering and more pruning. The costs rise in proportion to the size of the greening area and, due to issues of accessibility, escalate with the increasing height of a wall.

Up to 2m high: Small trellises, detail and base greening up to 2m high can always be reached without aid and can be managed by one person.

Up to 5m high: Up to this height, greenery can still be reached easily with a single leaning/telescopic ladder, but the ladder should always be secured by a second person.

Over 5m high: High façade greenings can often only be reached via a cherry-picker (a hydraulic lift), which is extremely expensive. In an urban or public street space, it will usually be necessary to apply for a temporary occupation of the public road, which must be indicated by regulatory signage, etc.., and during the work, the area and passers-by have to be secured from falling materials. The cherry-picker has to be transported, set up, then disassembled and returned. A single operation of this kind with a vehicle and 3 workers can easily cost over 1,000 euros-- likely many times the original set-up costs for the greening!