While an evergreen quality belongs to almost everyone's vision of an ideal facade greening, realizing this is only possible to a limited extent. Plants with green winter foliage often have unremarkable or inconspicuous flowers, and while this may not be that important for evergreen hedges, it will influence the possibilities for a wall greening, as more dynamism or flower-presence is usually desired here. You'll need to decide in your case whether the evergreen foliage is more important, whether "semi winter green" is enough, or whether a tidy, well-kept appearance during the leafless period is acceptable in place of winter green. 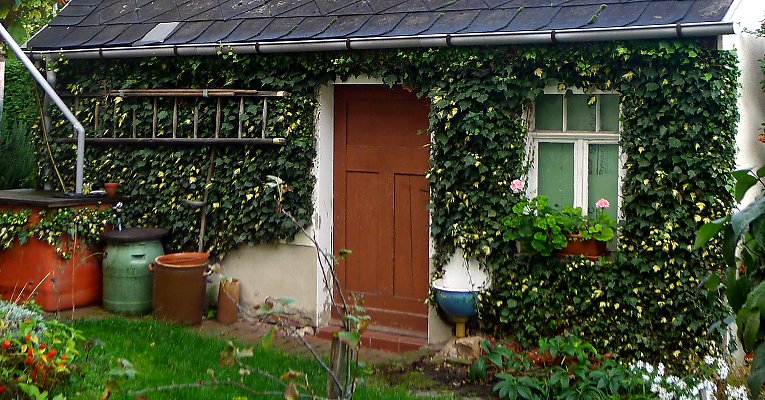 In our latitudes (Germany), ivy is and remains THE evergreen climbing plant par excellence, especially where large areas are to be densely covered. For low greenings along the base of a wall, the winter creeper (Euonymous) is an interesting alternative and matches the ivy in terms of its secure foliage adhesion. The next best option is the evergreen honeysuckle (Lonicera henry). Most other climbing plants may be 'ever'green in milder climates, but otherwise only 'winter'green and often do not provide the desired foliage density.

During harsh winters and when there is a lack of water, even ivy leaves can wither, while the leaves of the evergreen honeysuckle curl up and gradually drop off, making for a rather bare and sad appearance. This begs the question whether the leafless branches of a deciduous climbing plant wouldn't look more natural and appropriate for that season.

These plants keep their leaves more or less throughout the winter, only showing some discolouration or wilting towards the very end of winter. The scarlet firethorn (berry jewels!), cotoneaster, and blackberry belong to this group. The foliage dries up, withers, and gradually drops off in the spring or summer, partly due to a lack of light caused by new shoots growing over the existing leaves. This type of deciduous habit (leaf shedding) usually goes entirely unnoticed.

Planting climbers with semi-evergreen foliage is often sufficient to shorten the leafless period from 4-5 months to 1-3 months. Akebia and some new, more long-blooming climbing roses belong to this group. But, keep in mind that all these plants need moist soil (that is-- to be watered) even in winter!

With honeysuckle and some clematis, the leaves may remain green until the following spring. Depending on the particular winter, they can also start to wither. Aesthetically, this is less than lovely: as leaf shedding no longer occurs at such a late stage; the wilted leaves cling firmly to the shoots. If this is too unsightly for you, you'll need to remove the leaves manually; or, you'll need to start winter pruning earlier. *This will naturally be less likely in a milder and warmer a location is (like wine-growing regions and climates), but all the more likely at higher altitudes.

Some climbing plants are characterised by early budding (shoots) and late leaf fall. The foliage of these plants is not as long lasting as with the semi-wintergreens, but they may nevertheless be an interesting alternative to extend the green season of a wall or or other object. Kiwi and silver lace vine belong to this group.

Sometimes the goal is not necessarily to have green leaves in winter, but rather to have a generally well-kempt appearance even during the colder months. This is possible with almost all climbing plants if they receive an annual summer pruning. Particularly vigorous, sprawling plants which produce numerous shoots (like the silver lace vine) are an exception; they are difficult to keep in check even with a summer trim.

An early winter trim can also improve the appearance of your winter facade. You will have to consider on a case by case basis (with each plant species) whether to winter-prune in late autumn or if it is better to wait until after the last frost, as with roses and grapevines.

Without a summer trim, most climbing plants will look shaggy and unkempt by early winter. The Aristoloche (Dutchman's pipe) belongs to the delightfully low-maintenance exceptions; even without any pruning, it will still look acceptable after 2-3 years. This is because it develops few shoots but many leaves, which all fall off. The shoots from the previous year initially remain green and look alive even in winter. Winter jasmine also keeps its graceful appearance, and brightens the rather dull winter season with its small, bright flowers.