High-tech greening systems like the 'living green wall' you may have seen in airports or new shopping centres are becoming an alternative to classic facade greening. They are increasingly used in modern architecture, especially for expensive, high quality, and representative facades in southern Europe and Asia (e.g. Singapore). A pioneer in this style is the Frenchman Patrick Blanc with his "vertical gardens." The greenery there does not grow upwards from the ground or from pots, but sits on the facade in the form of planted modules. Such facade gardens are usually very expensive and maintenance-intensive; the plants must be replaced (in our latitudes) almost every winter. Alternatively, there are planting bags/pockets and similar hanging systems on the market, which make the replacement of plants easier. 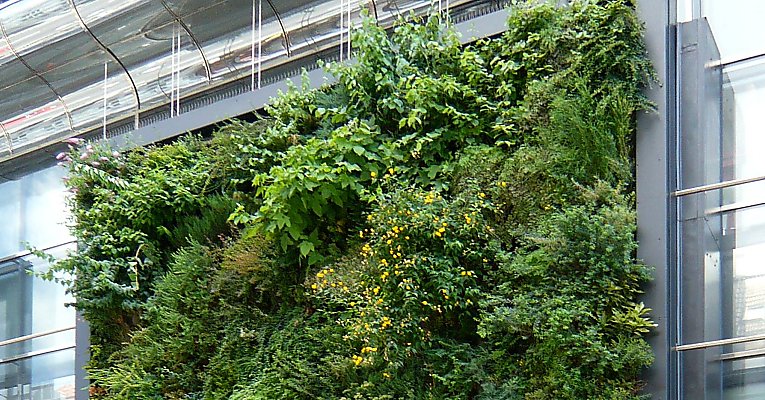 The modular green wall or 'vertical garden,' was conceived from two main inspirations: 1) some plants are able to grow on stone with very little topsoil. This phenomenon is then applied to facades and fronts of houses. 2) suspended plant pots/baskets, as often seen in the streets of southern Europe; using a 'hanging plant' model but hanging the plants tightly next to and on top of each other, green zones can be created that are not punctual but entirely covered with greenery-- creating specific and also broad-areal effects. These two concepts were the basis for the development of the modern 'living wall.'

Plants grow in special pots, trays, plant pockets, or substrate panels. Irrigation equipment, together with pumping and measuring instruments, are usually attached there. They are commonly hydroponic systems watered by a drip-irrigation method. Also an automatic supply of fertilisers is often integrated. In 2013/2014, a pilot project was carried out on a sound wall at the Palmengarten in Frankfurt Germany, where four different greening systems of 12 sqm each were tested. The results could now be trend-setting for further wall gardens in Germany and Europe. A support system with cables is not necessary for a modular green wall.

Low-cost alternatives include: 'metre-long hedges' (a 'hedge wall'), or hanging systems with pots and plant pockets, which are watered manually and removed in winter. Another possibility is the use of self-climbers in wall areas demarcated by recesses or protrusions--  naturally occurring niches -- resulting in defined surface-area growth and a lower-maintenance wall garden.