The installation of a wire rope trellis on a facade is within the reach of every do-it-yourselfer. There are, however, potential pitfalls to be aware of to avoid damaging the cable system or the masonry. When a wall trellis is damaged, it is almost always the mounts which have been affected: they can be bent or torn out of the wall where the flexural buckling load is the highest. This might be due to errors during assembly (poor mounting) or due to a faulty design/construction of the mounts (attributable to the respective manufacturer), but most often it is due to a planning error. As a result of slow plant growth, such problems often do not reveal themselves until the warranty period has passed. Here you can read about possible damage, explanations of their causes, and protective measures FassadenGrün takes with our own anchoring and mounting systems. 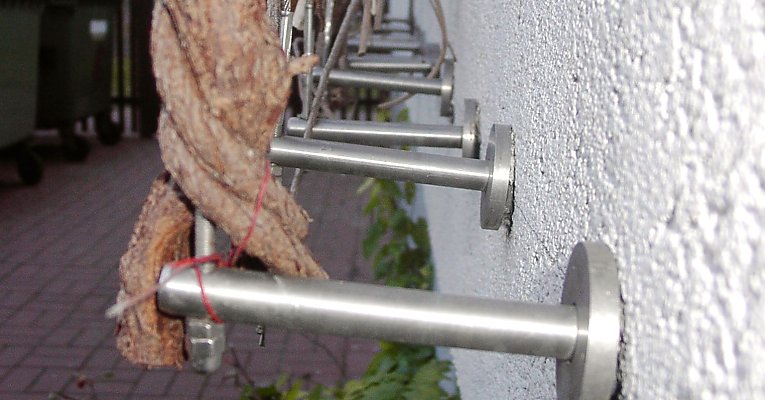 Damage to cables and mounts caused by excessive weight

Some cable systems are only zinc-coated (galvanised) and rather designed for indoor use: if mounted outside, they soon rust. Such elements are hardly qualified for facade greening. But stainless steel mounts too can rust; for instance, in the case of curtain systems. Oftentimes, discolourations occur because the respective stainless steel is not sufficiently rust-proof for outdoor use.

Using lighter/alternative rope tensioning elements (like curtain systems) which are designed for minimal loads only, structural damage is inevitable. Due to the heavy loads in wall greening caused by storms, wet leaves, fruits and so forth, the mounts will be torn out sooner or later. Likewise, mounts intended to carry a metal rod cannot carry cables; the tension load is much higher. Even mounts which are actually designed for metal bars will give out when clamping rope, because the tension is much higher using ropes instead of bars. Damage caused by vandalism, in turn, occurs when improperly planned (horizontal) tension ropes give a climbing possibility (a 'ladder') for a vandal.

(In)compatibility between Plants and Climbing System

Not all supports are suitable for all plants. A plant's habitus will determine which type of trellis is appropriate-- more or less close-meshed grids or cables arranged only verically, for example. At the bottom of each climbing plant profile, you'll find a table listing the shapes (and construction styles) of the cable systems that support the plant's optimal development; you'll also see which cable arrangments and shapes to totally avoid.

As a rule, climbing plants should not be allowed to grow over and wrap around trellis cables. Vigorous twiners will strangle them, and the resulting tensile stresses of up to 500 kilograms (3 mm rope) or 1,000 kg (for a 4 mm rope) will destroy the mounts. FassadenGrün provides information on the appropriate trellising technique for each climbing plant- especially for voluble, intense twiners (wisteria, bittersweet, silver lace vine). Refer to the respective plant profiles.

Tensioning ropes are multilaterally stressed, subjected to a variety of loads at different times. There is initial preload and later the load of leaves, fruits, and trunks can quickly reach 10 kilograms per square metre and even double in the case of wet leaves (after rain). In winter extreme loads of 50 kg / m² result from ice... that is, from multiple freezings and wind pressure, especially at higher altitudes and on corners of buildings. Most climbing trellis fasteners do not take these peak loads into account, the weight of which is borne entriely by the fasteners. Many providers of tension ropes fasten the ropes in such a way that the shock-like, very high tensile stresses are forcibly transferred to the mounts during peak loads (storm, icing, climbing or attempt at climbing, rebounding children’s balls, etc..). If these mounts are rigid and do not "spring," they cannot hold the loads and are quickly torn out. Mounts from FassadenGrün are only slightly pre-tensioned by hand (without turnbuckle) and thus, are not totally rigid but designed to be slightly springy. All cross mounts are equipped with an anti-slip protection, which means that overloads are only partially transmitted to the mounts. The ropes slip out slightly and can be re-tensioned.

Distance between wall and cables

The leverage effect and bending load on the wall mount increases with the length of the mount: that is, the anchor can be twisted or pulled out of the wall more easily the further it protrudes from the surface of the wall. Please observe the maximum protrusion allowance (wall distance) for our trellis fittings and mounts, which are indicated on the individual product pages.

These are the problems that occur most frequently with faulty wall mounting: the tensile stresses arising in a tensioned rope are underestimated or not taken seriously; the shafts are interrupted or tapered in diameter and thus susceptible to buckling in the area of the highest bending buckling load, of the highest bending buckling load, i.e. when they are introduced into the wall; or, the anchoring in the wall is not sufficiently strong. Mounts from FassadenGrün do not have a shaft break (disconnection/interruption) or tapering, and with strong plugs, they will be fastened deeply and securely into the wall.