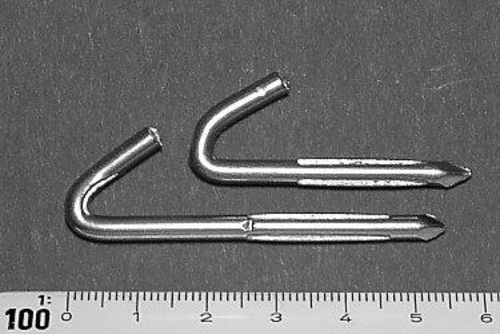 Especially for the selective attachment of climbing plants according to cable system 1010. Also for the final attachment of wire (or wire rope up to 3mm diameter in easy kits), in free-standing trellises, planks of half-timbered houses, etc... Also can be used as an intermediate holder, but we recommend the less expensive staples for this purpose. Can be used as hooks in the vineyard. Suited for hammering into softwood and hardwood, also into the end-grain. For solid wood as well as cladding. In connection with plug DH 06040, KN 04055 is also suitable for wall mounting - with low loaded pressure aids. Go here for support in selecting appropriate eyebolts.

In most softwood, the nail can be driven in at the marked points without pre-/pilot drilling. When hammering in, a mandrel (aluminum) or a pressure plate should also be placed between the hammer and the cramp nail, because direct contact with the hammer can lead to rust spots (corrosion) as a result of material mixing at the hammering point. Pre-drill into hardwood, preferably with a diamter of 2.5 mm, or with Robinia, even 3.0 mm; here, a test drilling and test nailing are appropriate. Alternatively, after hammering in, the striking surfaces on the eyelet can be slightly sanded with fine sandpaper in order to remove any iron residue that may have been transferred from the hammer head. In locations exposed to the wind and with only one-sided tension of wire frames, the wires and staples are placed on the side facing the wind to prevent them tearing out later.

In most cases, wires are just passed through the loops of the staple nails and secured by 'twisting' them. If wires or ropes are, however, directly attached to the nail hook, drive the nail in as deeply as possible until both ends are driven into the wood: the resulting eyelet can then absorb more load. When hardwood is used, then pre-drill for the bent end, preferably with a cardboard template. The two shank parts of the nail that reach into the wood should then be driven in slightly offset to the wood grain in order to minimise splitting. To prevent corrosion: after hammering in, sand the striking surfaces of the eyelet a little with fine sandpaper to remove any iron residue that may have been transferred from the hammer head.

Made in Germany (North Rhine-Westphalia) 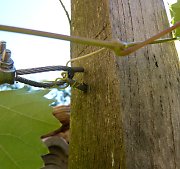