With the "garden city" movement, wall gardens experienced a boom-- beautiful green trellises and food self-sufficiency through the cultivation of espalier fruit being the main pillars of this new greening movement. The settlements built in Jena, Weimar, Leipzig, and elsewhere still show trellises from this period. Typical were trellises (bars and lattices) in chessboard design / chequered pattern without emphasis on the vertical and without strongly protruding lath ends. 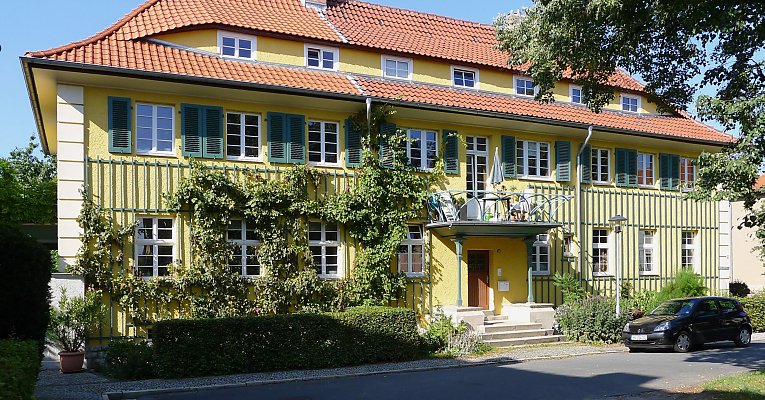 Grapevine on a building in the "Garden-City" architectural style, Weimar / Thuringia

The idea of a "green city" became somewhat contagious... initially, it was adopted exclusively in the neo-Germanic (revival) style. Soon thousands of simple single-family houses were built, as well as "social housing buildings" (promoted by the new building societies/savings and loan associations), and with them, wall trellises. The 'green city' idea married itself here with the international style from time to time. Even hospitals and industrial buildings then became greened, mostly with self-clinging climbers that didn't need a cable or wire system.

The wave of facade greening subsided when it became clear that roses and clematis needed care, pruning, and the time for both. The same was true with the fashionable fruit trellises: without consistent care, no 'prize' (fruit yield) was to be won here. It was finally World War II, circa 1940, which halted the facade gardens and threw them back by a decade. With what was left of facade greening by then in the 1950's, heirs and successors often had no idea about the care and pruning of the climbing plants. 'Greened' buildings and houses therefore became a peripheral theme until the environmental movement was born.