After 1945, the greening of buildings initially received no new inspirations or impulses. The great post-war cleanup was the higher priority, both physically and mentally. Promising projects of the “Garden City” period slept, because the heirs of the remaining houses understood nothing of the art of pruning and had no desire to take care of greening on behalf of a few fruits. There was thus a pause until 1968 when the Eco / Environmental movement started; with it arose the ecologically-motivated greening of buildings. Many new green areas were created; particularly with high greening, a few difficulties arose too. 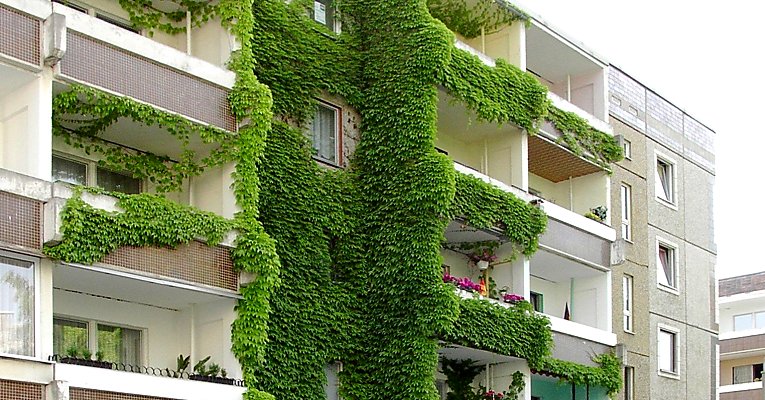 Parthenocissus tricuspidata on a typical East-Germany building in Leipzig / Saxony

While the environmental movement is not an "architectural style," it has nevertheless significantly impacted our towns and cities. The environmental groups which carried the "greening of houses" from the country to the cities were responsible for this. Inexpensive wall surface greening were intended to improve the inner-city climate: "Plant wild vine without expensive climbing aids on your house, and all will be good!" -- so were the appeals. "If you do it, do it right"- was announced, and so it was... "The greening" had begun, and full greening was the order of the day. Innumerable urban funding programs were established, giving away thousands of self climbing plants. The model was the greening of social housing construction of the 20's and 30's. Competitions like, "the most beautiful greening project in our city" were also held.

Greening as a Requirement

Some cities require green areas in densely built-up areas, and that they be planted according to square meter keys for conversion and expansion, with the aim of preserving or improving the microclimate. Too often the demand is perceived as annoying and then only half-heartedly fulfilled. A colleague from the greening industry reported that a large commissioned (not yet implemented) verticle high greening contract on a new building was canceled by the client the day after the acceptance of the entire new building by the municipal building authority, because the officials suddenly 'forgot' about the greening part. The cancellation was then officially signed and confirmed by the official as unessential and 'dispensible'-- a 'stroke of luck' for the client's wallet indeed!

Such greening projects are then especially realizable when they do not result form anonymous regulations but are the will of the client (contractor), who will take care of the maintenance with passion and love.

In the enthusiasm of a new project or construction, it can sometimes be overlooked that every now and then greening projects only function if a perfect net of agreements exist: support of the house-owner, acceptance from tenants and neighbours, coverage of maintenance costs and disposal of the autumn foliage etc... Sometimes setbacks can follow when a cute little greening project developes in time into a mean green octopus, penetrating with her leafy tenticles and shady shoots into roof structures, cracks, and crevices, and damaging materials! Is the home owner ready to hire a specialty firm to trim the 4th floor of her/his house annually, and pay for it?