Clematis Cultivation and Breeding in Saxony

FassadenGrün sells climbing plants from the Sachs tree nursery (Saxony, Germany); among them are large-flowered clematis hybrids. During a visit in autumn 2015, we had the chance to interview Mr. Sachs and his daughter Mrs. Tolksdorf. The interview is published here. 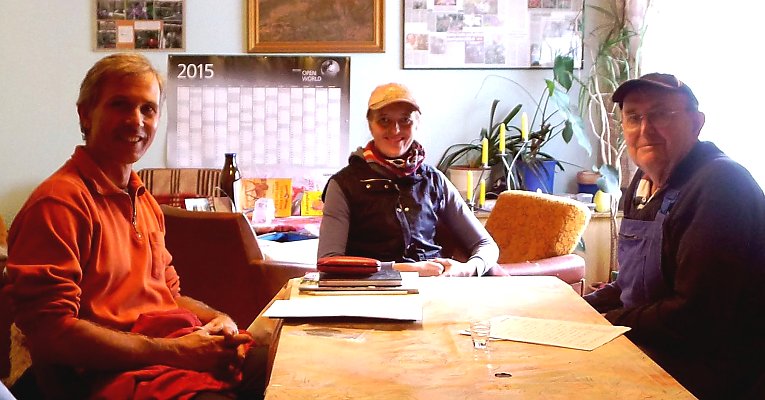 Mr. Sachs, during the GDR times, you cultivated mainly roses and peaches in your nursery, and in 1993 you switched to climbing plants. Where are your plants sold?

Mr. Sachs: We sell directly from the nursery and at plant/garden fairs and markets, but we also supply wholesalers and garden centres. Our homepage provides information about the next market dates and online shipping.

You've also been working for years on new clematis hybrids. There are thousands of them already-- what motivates you to create new ones?

Mr. Sachs: Well, I'm a member of the International Clematis Society and I've been halfway around the world, looking around and seeing clematis everywhere. Of course, I find the topic fascinating, and I have often found myself thinking, 'in this or that direction you could breed something else!' And then you try, and then ambition enters the game. The breakthrough came at the Federal Horticultural Show (Bundesgartenschau) 2005 in Munich where we won a medal for our new varieties, and suddenly a demand was there. We were supposed to deliver thousands of plants and were hardly up to the rush order!

How does the creation of a new clematis actually work... how are they bred? Is there a breeding 'formula' or goals that you aim for?

Mr. Sachs: The starting point is always an already existing specific variety which you want to cultivate or develop futher by breeding, and from which we remove the pollen to make a 'mother plant.' Then pollen dust from another clematis (the 'father plant') is applied with a brush.

Mrs. Tolksdorf: ... one can also arrive at the same result by just letting nature do its thing. When the mother plant without pollen is exposed to (just put in the vicinity of) another clematis, pollen dust will reach it one way or another-- by wind or bee...

Mrs. Tolksdorf: The mother plant develops the seeds which are then sown-- many will sprout! After 2 years the small seedlings are sorted according to their growth behavior. The weak ones are sorted out and composted, while the stronger ones get to grow on. Some will reveal themselves to be prone to disease and will also be sorted out. One year later, the remaining plants will flower for the first time; this is then the third phase of the selection, this time with the criterion: What looks interesting and new? Is there something here that has never been seen before in clematis hybrids... for example-- the ultimate yellow clematis, longed for by all clematis breeders? Only the exceptional plants are kept and cultivated further; all others go to compost, such as those with only 4 petals (instead of 6 or 8) that don't look full and round...

Mr. Sachs: We kept a particular clematis just because my granddaughter wanted it, and it even got a name. Sometimes nothing is useable... then everything goes to the compost and the work was in vain. The selected clematis are observed for years: does the flower colour remain constant or does it change over time? That would be a criterion for exclusion. Do the plants get mildew? It is also important for us that the new varieties are suitable for container/pot gardening, that the flowers also develop low not the plant and not somewhere on long shoots far above the trellis. Only after about 10 years, when the abundance and duration of the flowers have been thoroughly tested, should the breeder go public with a new variety and register it in England.

Sounds like a lot of work and little time off. Can you confirm that?

Mr. Sachs: That's right. We don't really have much free time in the nursery. That's why breeding new varieties is something we do on the side. But it's always exciting when beautiful new varieties are created.

The climate here in Saxony is harsh. What do the clematis have to say about that?

Mrs. Tolksdorf: Clematis naturally thrive better in mild coastal climates, like on the German Baltic Sea or in Estonia. But Saxony also has its advantages for breeding: plants that passed the local selection here have known real winters. They are robust and particularly hardy!

Who else breeds new clematis in Germany?

Mr. Sachs: There is only one company, Westphal, that I am aware of. In England, Estonia, and Holland, much more is happening.

It is well known that garden centres often sell roses and vines under made-up or fanciful names. They are then called "Paradise Rose," "Yellow Vine," or something else to conceal their origin. Is this also possible with your clematis? Is it possible that a customer buys a Sachs Clematis and does not know the true variety name?

Mr. Sachs: Yes, it is possible if it was not purchased directly from us. We are all the more pleased when retailers sell the varieties we have bred under their real names!

You are cultivating many well-known clematis and climbing plants in addition to cultivating new varieties. What about the potting soil, when peat is so scarce and its extraction is ecologically questionable?

Mr. Sachs: That is hardly a concern, because we produce our own soil from compost and with as little peat as possible! The soil is steam-treated on the farm... the heat kills the weed seeds.

How do your customers choose a clematis?

Mrs. Tolksdorf: It depends. Many ask for advice... some see a particular flower and then want to have this plant. Others look for the ultimate, miracle clematis-- large, multicoloured, full, vigorous, continuously blooming, top-healthy, and evergreen... of course, there is no such thing. Some also do not want to deal with the pruning; for them we recommend our easy-care shrub/perennial clematis.

Is this a new trend?

Mr. Sachs: Yes, in addition to clematis hybrids, there is a greater desire for the small-flowered varieties. This also applies to sunny, warm facades, where the large-flowered hybrids hardly stand a chance. Shrub/bush clematis, on the other hand, are ideal as companions for climbing roses, which tend to be bare at their base!

Mr. Sachs, a look into the future: You are 77 years old... how do you see the future of your company?

Mr. Sachs: The market for small nurseries is difficult and is not getting easier. We remain a family business -- I still particiapte but have passed the torch on to my daughter!

We wish you the best and thank you for the interview!